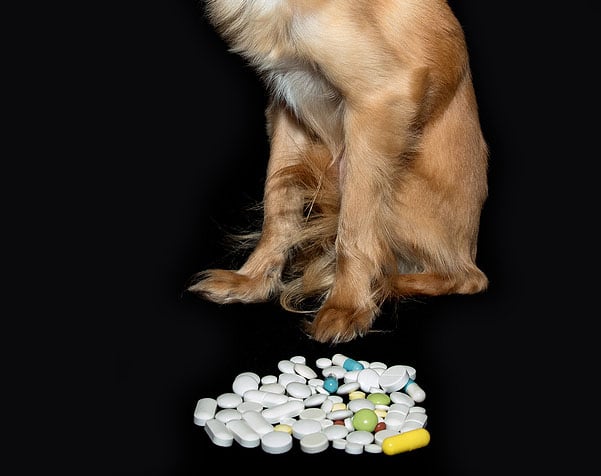 Below is a list of the top 10 medicines in your home most frequently ingested by pets, along with some tips from the veterinarians at Pet Poison Helpline on how to prevent pet poisoning from human medications.

Topping our Top 10 list are common household medications called non-steroidal anti-inflammatories (NSAIDs), which include common names such as ibuprofen (e.g., Advil and some types of Motrin) and naproxen (Aleve). While these medications are safe for people, even one or two pills can cause serious harm to a pet. Dogs, cats, birds and other small mammals (ferrets, gerbils and hamsters) may develop serious stomach and intestinal ulcers as well as kidney failure.

When it comes to pain medications, acetaminophen (e.g. Tylenol) is certainly popular. Even though this drug is very safe, even for children, this is not true for pets—especially cats. One regular strength tablet of acetaminophen may cause damage to a cat’s red blood cells, limiting their ability to carry oxygen. In dogs, acetaminophen leads to liver failure and, in large doses, red blood cell damage.

While these antidepressant drugs are occasionally used in pets, overdoses can lead to serious neurological problems such as sedation, incoordination, tremors and seizures. Some antidepressants also have a stimulant effect leading to a dangerously elevated heart rate, blood pressure and body temperature. Pets, especially cats, seem to enjoy the taste of Effexor and often eat the entire pill. Unfortunately, just one pill can cause serious poisoning.

These medications are designed to reduce anxiety and help people sleep better. However, in pets, they may have the opposite effect. About half of the dogs who ingest sleep aids become agitated instead of sedate. In addition, these drugs may cause severe lethargy, incoordination (including walking “drunk”), and slowed breathing in pets. In cats, some forms of benzodiazepines can cause liver failure when ingested.

Birth control pills often come in packages that dogs find irresistible. Thankfully, small ingestions of these medications typically do not cause trouble. However, large ingestions of estrogen and estradiol can cause bone marrow suppression, particularly in birds. Additionally, female pets that are intact (not spayed), are at an increased risk of side effects from estrogen poisoning.

Angiotensin-converting enzyme (or “ACE”) inhibitors are commonly used to treat high blood pressure in people and, occasionally, pets. Though overdoses can cause low blood pressure, dizziness and weakness, this category of medication is typically quite safe. Pets ingesting small amounts of this medication can potentially be monitored at home, unless they have kidney failure or heart disease. All heart medications should be kept out of reach of pets.

Beta-blockers are also used to treat high blood pressure but, unlike the ACE inhibitor, small ingestions of these drugs may cause serious poisoning in pets. Overdoses can cause life-threatening decreases in blood pressure and a very slow heart rate.

Pets — especially dogs — get underactive thyroids too. Interestingly, the dose of thyroid hormone needed to treat dogs is much higher than a person’s dose. Therefore, if dogs accidentally get into thyroid hormones at home, it rarely results in problems. However, large acute overdoses in cats and dogs can cause muscle tremors, nervousness, panting, a rapid heart rate and aggression.

These popular medications, often called “statins,” are commonly used in the United States. While pets do not typically get high cholesterol, they may still get into the pill bottle. Thankfully, most “statin” ingestions only cause mild vomiting or diarrhea. Serious side effects from these drugs come with long-term use, not one-time ingestions.

This helpful information is from: www.petpoisonhelpline.com